Reconciling who you want to include in your bridal party with who you're expected, requested, or even told to include can seem like an ordeal. With friends and family anticipating or assuming they'll be asked, it's easy to get confused and resentful. After all, this is supposed to be your day, your way, right? Relax. Choosing your attendants needn't be a nightmare. Prioritizing what's important is the key to arriving at a list that pleases everyone—even you. 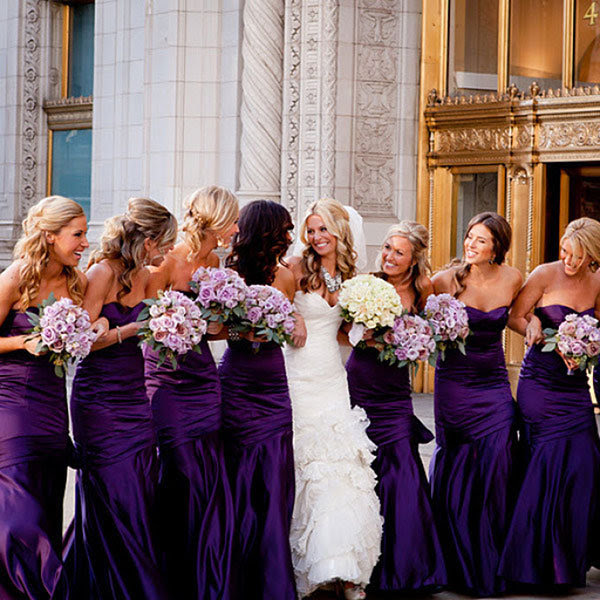 The most obvious question is how many attendants to ask and who should be your maid/matron of honor. While etiquette books suggest one usher per 50 guests, protocol surrounding the number of bridesmaids is fuzzier (12, however, is the limit). "What's important is that you include those people to whom you feel closest," says Deborah Jones, owner of A Wedding In Minnesota, a bridal consultancy in Eden Prairie, Minnesota. Also consider where you'll be standing at the altar or huppah, and how many people can fit on either side of you. Aesthetically, the same number of attendants on both sides looks best, but there is no rule that says they have to match.
Start by writing your wish list of attendants. Next, add your fiancé's picks, and those who would make political sense(your brother's wife to make him happy, for example). See if there are natural groupings that would make choosing easier: all sisters, all school friends, just one sister and one friend, etc. If your list is still unwieldy, consider the following to help you eliminate people or decide their role.
First, think about their responsibilities. The maid/matron of honor is generally the bride's right-hand woman before and on the day of the wedding. Her main duties include planning the bridal shower and helping the bride select her gown and address invitations. The bridesmaids assist the maid/matron of honor and bride. All typically pay for their own dresses and travel expenses.
Second, evaluate your needs and expectations. Is this a gala affair with many details you'll need help coordinating, or a small, no-fuss ceremony? Are you the type of person who surrounds herself with friends and needs a sounding board for every decision, or do you have only one or two close confidantes?
Do you expect your attendants to devote a significant amount of time and money to your wedding? Would you feel comforted knowing that all of your bridesmaids lived in town, mere minutes away for minor emergencies? If someone says she can't afford to participate, can you make up the difference (and not take it personally)? Be honest with yourself: Are your expectations reasonable? Will you get mad if someone can't help out as much as you'd like due to her work or family commitments?
Third, factor in the lifestyle and current situation of those you intend to ask, and how it meshes or clashes with their responsibilities and your needs. For example, what if your sister lives in Alaska and your best friend just lost her job, or if another friend is so swamped with work or a new baby that she barely squeezes in a phone call, much less time to plan a bridal bash. All these circumstances impact a potential maid's ability to do the best job possible. That said, even if someone can't be there physically, she may still provide valuable moral support. So decide what's most important to you.

Now the fun part—asking people to be in your party. Some brides try to avoid disappointing anyone by asking people they don't really want to participate, assuming they'll say no because they're too busy or won't be able to afford it. Big mistake: This approach can easily backfire. Some people are so honored to be included that they'll move the world to make it happen. Only ask those you'll be thrilled to hear a "yes" from.
If there's someone you want to ask but are concerned she'll feel pressured by time or money constraints, create a scenario in which each of you would feel comfortable backing out gracefully.  Let her know she's one of your top choices but you understand if she has other commitments that make it difficult for her to take part. If you're willing to cover expenses, ask her how she feels about that. If she knows how important she is to you, she'll probably feel flattered, not insulted.
If you expected a friend to say yes and she doesn't, don't be offended. Chances are it's no reflection on you. Your friend is simply doing you the favour of being upfront and honest about the time and money she wants to devote to your event, an occasion she respects enough not to ruin.
If someone does accept and later seems unhappy with her decision, try to determine what's really going on.

Resolving conflicts with parents and in-laws isn't always so simple. Sometimes an edict is handed-down and that's that. For example, you may be told your sister will be your maid of honour, whether you like it or not. If you have a big enough party, it may not matter—a lot of your friends are included anyway. If you were planning on a small party, consider making it bigger to keep the peace.
Even if you can enforce your will and leave out a family member who expected to be included, consider the effect your stubbornness will have on family harmony. "If you deliberately leave out someone your parents or in-laws want included, you may be making a bigger statement than you intended," notes Claro. Their conspicuous absence is a visible declaration of your rejection. When it comes down to it, would including this person really ruin your wedding day? Or will the repercussions of leaving her out sully family relationships for years to come?

CHOOSING A WEDDING PARTY IS NOT EASY...

Wedding party selection can be a total beast what with all the DIY and destination weddings and mixed families.